WHEN IT COMES TO GIVING BACK, BRIAN JULIUS AND ZANE WILSON CAN’T SLOW DOWN.

Brian Julius and Zane Wilson are good at many things. Relaxing is not one of them. 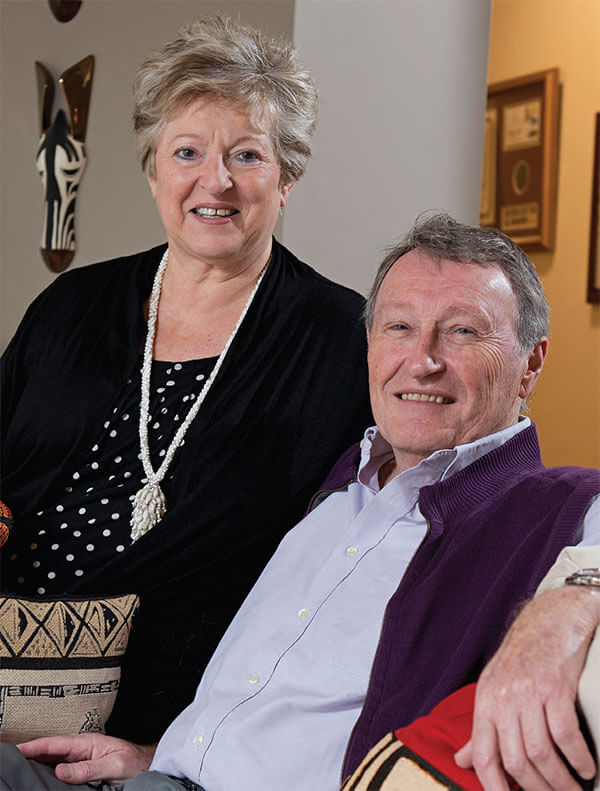 “I’m a total workaholic. I always have been, whether it’s been business or charity,” said Wilson, 69. “Brian and I don’t have (children), and we’ve always worked ourselves silly and enjoyed it.”

She isn’t exaggerating. Wilson’s typical workday starts at 7 a.m. and ends 15 hours later. And that’s when she’s working from home on Hilton Head Island, more than 8,000 miles away from her office in Johannesburg, South Africa.

It is there that the charity she started in 1994, South African Depression and Anxiety Group, continues to change lives with its support groups, crisis hotlines and informative material. The group was born from Wilson’s own pain. She suffered from acute panic disorder for 10 years, trying doctor after doctor to understand her ailment and get relief.

“They can be very unpleasant. I was feeling acutely suicidal in some stages,” said Wilson of the panic attacks. “There just wasn’t treatment available in South Africa.”

She moved to the African country from her native England in 1969 to start a business and met Julius, also an entrepreneur, in 1982. The two were instantly inseparable, and married in 1984. Julius was there to help Wilson through her long ordeal. When she finally found relief through the right psychiatrist and medication, she wanted to help others who were suffering.

“I thought, ‘I’m white, I’m financially able to afford to go to a psychiatrist. What on earth is happening to people who don’t have anywhere to go for help?’” she said.

The organization has become the largest and most influential mental health advocacy group in Africa — not just South Africa — focusing on all aspects of mental health.

Julius, meanwhile, has been equally successful with multiple businesses, including launching his own fast-food company and a teleconferencing company. He has exclusive rights with The Walt Disney Company for a South African Epcot Pavilion, which was approved by former South Africa President Nelson Mandela.

“We’ve done a number of different things; fortunately, most of them work out,” he said, his easy sense of humor softening the business edge.

The power couple moved to Hilton Head in 1999, in part to get away from unstable conditions in South Africa, and also so at least Julius, 72, could slow down a bit.

“I tried playing golf, and realized it wasn’t very satisfying and I wasn’t very good,” he said. “I find business a lot more satisfying.”

Speaking Books hope to fill a need in communities battle low literacy rates.The books include a recording of the text, using a technology that is common in children’s books. The collection now includes more than 65 topics in 35 languages, distributed in 30 countries.

Julius developed Speaking Books after he was diagnosed with cancer in 2013. Against all odds, he seems to have beaten the disease, and that hard-fought battle led him to want to give back to other cancer patients — particularly young ones. And so a Speaking Book on pediatric cancer is in the works.

“Speaking Books is my biggest passion. This was what you could call my ‘encore career,’” he said.